Look What I Made Wednesday 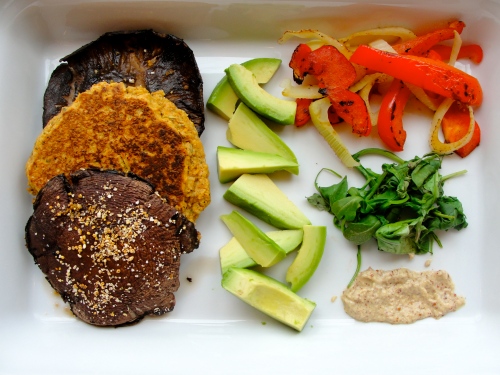 This one’s for the vegetarians.

As much as I love a hunk of steak and a medium-rare burger that drips with meat juices – and I confess, I am now a proud participant in a beef CSA! – red meat can actually be high in natural sodium.

Three ounces of chuck can land you upwards of 90mg, depending on brand and percentage of fat (other kinds can be much lower). So like any health conscious Jack or Jill, sometimes a beef overload gets the best of you and you want to balance your carnivorous tendencies with occasional herbivore fare.

That’s how we get to the garden burger.

Supposedly packed with vegetables, healthy grains, and less fat, this alternative patty seems like a good choice. It even tastes like a good choice. Especially when piled high with condiments and pickles. But when you look beyond the delightful pictures of tomatoes and leafy greens on the package and catch sight of the nutritional information, you’ll discover that many of these products replace the umami flavor of meat with loads of salt.

Gardenburger’s Original veggie burger contains a whopping 400mg of sodium (and a whole other host of ingredients that don’t seem like they could grow in your garden), and we haven’t even gotten to the bun yet. Which would be another 400mg of sodium and that’s almost a day’s worth of the salty stuff in one measly muesli meal.

But don’t fear. A low sodium veggie version is here. Actually, right here. Like, look below. 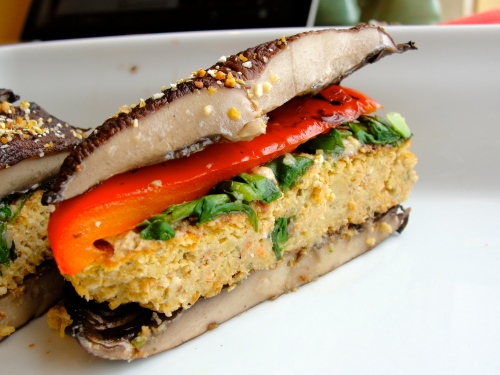 This garbanzo based patty (with some surprise ricotta inside) was seared on the outside and moist on the inside – just how you want ’em. I topped it with roasted fennel and peppers and some sauteed arugula. And to really make them special, I used portabella mushrooms as the buns, adding sesame seeds to one of them to look more like bread. Tricky, tricky and suspiciously delicious.

Hopefully you’re drooling over these tasty toadstools. They were incredibly easy to make – thank you Cuisinart – and only require a pan to “grill.” I’m hoping to test out a few other bean-based burgers in the coming weeks, so if you have a favorite recipe or combination, let me know.

And a quick announcement before I sign off for the day: thank you to everyone for participating in the Love Your Heart Recipe Rally! Did you have as much fun as I did? Did you make any of the new recipes? Do you have any new ideas of meals you want to Salt-Free? Post below and let us know!

With that, happy Wednesday. Stay warm and full and as always, chow on.

8 responses to “Look What I Made Wednesday”